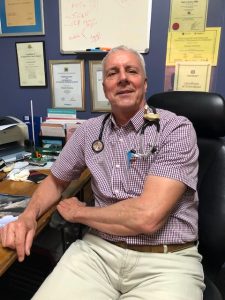 There is always more to learn as a GP supervisor – even after three decades in the role, according to Queensland doctor Simon Hosking.

Simon estimates he has taught “between 50 to 60 registrars” since becoming a supervisor at Aberdovy Clinic, Bundaberg, on February 22, 1989.

“I say to medical students and registrars that I learn as much from them as they learn from me,” Simon said.

“You need to stay up-to-date to answer their questions. Having a registrar makes you a better practitioner and it keeps the whole practice moving forward.”

As well as teaching young doctors how to practise in a knowledgeable and ethical way, Simon also helps registrars understand how to manage the challenges of general practice.

“One of the challenges for doctors is burn-out and going stale; and where to combat that is by having variety in the practice,” Simon advises.

“You can’t just do consults every day. You need to find an area of interest in the practice and foster that.

“You also have to be good at accepting limits in terms of patient demands, and the issue of time (management).”

Simon’s colleagues and practice staff gathered last week to surprise him with a GPSA Recognition of Service Award (30-plus years) at a special morning tea.

As a proud training practice, Simon and his three practice partners are all supervisors. He said with four supervisors on hand, plus recently fellowed GPs, “the registrars always have someone to ask questions”.

“It’s a great privilege to be a part of junior doctors’ professional and personal life; to have had an influence on shaping their lives,” Simon said.

It is the kind of influence the long-time supervisor is enthused to continue paying forward, thanks to great mentors and teachers during his own training.

“I had some good teachers and mentors at Royal Brisbane Hospital when I was involved in the Family Medicine Program, who stimulated me and set me on the path to where I went,” Simon said.

He fellowed with RACGP while working as a country medical superintendent in Childers, Queensland, and moved into private practice at Aberdovy Clinic in 1987. The clinic became a registered training clinic in 1989, starting Simon’s 30-year journey as a supervisor.

And with no retirement plans, Simon is set to continue providing one of his staple lessons to future registrars.

“The one thing I try and encourage the registrar to do is actually think for themselves because they are no longer in a hospital environment where they are told what to think.