They have each recently received the GPSA Recognition of Service Award for more than 10 years’ service as a GP supervisor. 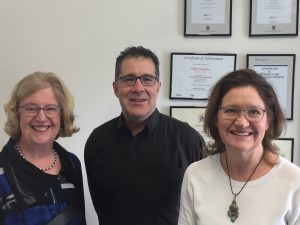 The pair – who are not married, nor related – started their GP supervision journey together 14 years ago, sharing their first registrar Dr Nicole (Nikki) Hamilton (pictured right).

Janet said while they were experienced at accommodating medical students, GP supervision “came quite by accident” when Nikki approached them for placement during her final term as a GPT4.

As North Mitcham Clinic grew to a larger premises at Donvale, there was room to accommodate a regular stream of registrars, with Andrew and Janet since sharing supervision of up to 20 young doctors.

“Both Andrew and I have enjoyed the challenge of teaching and giving back to the system that trained us,” Janet said.

“It keeps us young – and helps keep us up-to-date  … you have to be one step ahead of your registrars.”

On the flipside, Andrew said supervisors also learned a lot from registrars as they explored medical questions and clinical reasoning scenarios together.

He said registrars shared ideas and experience from other mentors and practices, which helped supervisors and colleagues “become more invested in the medical community” outside of their own practice.

“It makes you less isolated in the practice – and helps you stay contemporary.”

Along with altruistic motivation to impart knowledge with young doctors, Andrew said the flow-on benefit of being a supervising clinic was healthy for business succession.

The clinic has a broad range of doctors, bolstered by a number of Andrew and Janet’s registrars returning after fellowship, including Nikki who still practises at North Mitcham Clinic.

“It’s enjoyable watching young doctors come through, and it has also invigorated our clinic with young doctors wanting to come back and work for us,” Janet said.

Andrew and Janet agreed their co-supervision of young doctors had benefited each other, the registrars and patients.

“The value of two of us doing supervision is we both come from different angles, so the registrar gets a broad view of general practice: they see there is more than one way of doing things,” Janet said.

The pair enjoy the variety teaching adds to their working day.

“You get to stop from consulting and talk about clinical issues and medicine, and you both learn,” Andrew said of the supervisor-registrar relationship.

While Andrew and Janet divide their teaching load, they said their registrars also had more access and choice of supervisor for specific queries and during busy periods.

For practices new to GP supervision, Janet advised the first challenge was training administration staff how to educate patients during patient bookings about the role of registrars.

She said other challenges included setting up systems for practical tasks before, during and after the registrar’s term in your practice.

“For example, all the paperwork,” Janet said “and tying up loose ends when a registrar leaves, such as their recalls are covered, and that results that come in after the registrar has left are checked and seen.

“We have Best Practice Software and have regular automation set up for all results to come to me once we have signed off a registrar. So, we make sure things are handed on.”

“Be interested in your registrar’s journey so far,” Andrew said.

“A lot of registrars have had quite a stressful time in their careers. It’s rewarding giving registrars an environment where they can enjoy asking questions.”

Janet said she and Andrew “had learnt along the way how to impart knowledge” and acknowledged GPSA as a great support in their teaching journey.