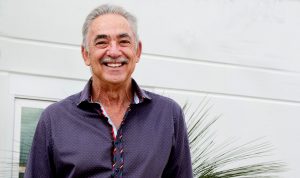 SmartVax developer Dr Alan Leeb of Illawarra Medical Centre in Perth has been a GP supervisor for 30 years.

Dr Alan Leeb, of Illawarra Medical Centre in Perth, was motivated to create SmartVax by the 2010 CSL Fluvax crisis which resulted in an unanticipated spike in adverse events.

This event saw the rate of childhood vaccinations for influenza drop from 45 per cent in 2009 to seven per cent by 2011.

SmartVax uses SMS and smartphone technology to actively monitor the safety of all vaccines given in Australia in near-real time.

Across a network of 313 general practice and immunisation clinic sites, more than 322,000 influenza vaccine encounters were monitored across Australia for 2019.

“We knew with statistical confidence within the first week of the 2019 immunisation program that the flu vaccine was safe and well tolerated in all age groups and across all brands of vaccine,” Dr Leeb said.

“The unseasonal early timing of the 2019 flu season and high media coverage of flu-related deaths in all ages has had the beneficial effect of a sharp rise in immunisation rates.”

Dr Leeb said almost 50 per cent of all children under five years of age in his home state Western Australia had received a flu vaccine in 2019, a figure which was reflected nationally.

“This is a great result and I am sure had a positive effect on flu incidence and transmission,” he said.

In recognition of the impact of SmartVax, Dr Leeb was awarded the 2019 AMA Excellence in Healthcare Award earlier this year. His contribution has also been recognised by the RACGP with the Peter Mudge prize, for research most likely to significantly influence daily general practice.

His practice, Illawarra Medical Centre comprises mostly of doctors who were former registrars, and is the RACGP 2019 Western Australia General Practice of the Year.

Dr Leeb, a GP supervisor of 30 years, remains equally enthusiastic about teaching the next generation of Australia’s family doctors.

He estimates teaching between 70 and 80 registrars during his career and takes pride in their achievements and how many have returned post fellowship.

“I love the stimulation of teaching and enjoy the stimulation and interaction with registrars to pass on my knowledge. It’s always good when you see a registrar competently pass their exams and know you have played a part,” Dr Leeb said.

“We have 18 doctors on the team at the moment, and only one is not a former registrar.”