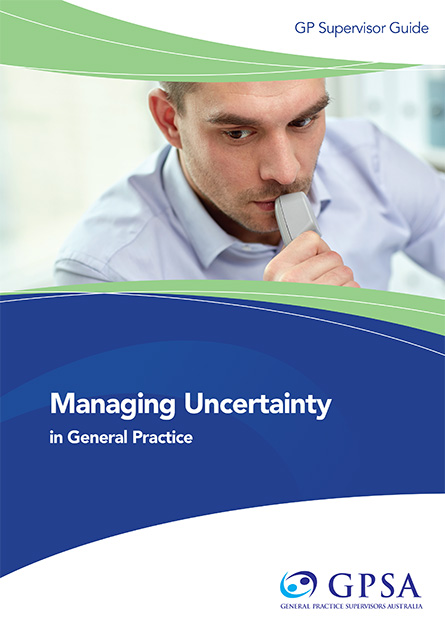 This GPSA guide aims to support GP supervisors to identify, assess, and facilitate development of skills in managing uncertainty.

The transition from working in the hospital to the community setting is highly challenging for the new GP registrar. The general practice environment is
characterised by a wide breadth of (often unfamiliar) clinical problems; complex and chronic disease management; relative independence of decision-making;
time pressures; complex practice systems; and financial and billing issues.2 On top of all of this, GP registrars must also learn how to manage
uncertainty, one of the defining features of general practice.

If there is one certainty in general practice, it is the inherent presence of uncertainty. Undifferentiated presentations are very common in primary care
and a firm diagnosis is elusive in many encounters.3 Symptoms are often vague, examination findings unclear, investigation results conflicting,
and response to treatment inconsistent. Guidelines may be irrelevant or non-existent. Clinical decision-making may be compromised for a myriad of reasons.
As a result, uncertainty is intrinsic to the general practice encounter. Indeed, it has even been proposed that managing uncertainty is the ‘specialty’
of general practice.4

Tolerating and managing uncertainty, while related to the individual doctor’s personality, is also a learned skill. Management of uncertainty is a core
competency of both the RACGP Curriculum Core Skills Unit9 and the Australian College of Rural and Remote Medicine primary curriculum.10
As part of the apprenticeship model of Australian general practice training, you can therefore play a critical role in developing this skill in your registrars.

This GPSA guide aims to support GP supervisors to identify, assess, and facilitate development of, skills in managing uncertainty.

Thank you to Dr Simon Morgan and Dr Justin Coleman for their contributions in writing this GP supervisor guide.

There are no reviews yet.