Frank’s mission: “I want you to be a great GP.” 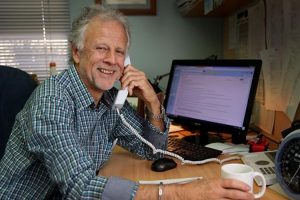 Frank Jones is passionate about the profession of general practice, and instilling the same enthusiasm in the next generation of family doctors.

It’s impossible to quantify his influence, having supervised “at least 30-plus” registrars during his three-decade career in regional Western Australia.

“I like to leave them with the passion I have for general practice,” the immediate past president of RACGP said.

“It’s such an honour and privilege to be a doctor, and more specifically as a GP because you have this clinical continuity of care for patients.

“This honour and privilege fires me up every day: I look forward to going to work every day.”

Welsh-born Frank fellowed in the United Kingdom 35 years ago, before moving to Australia and initially working with the Royal Flying Doctor service. He has devoted most of his career to general practice in Mandurah, about an hour south of Perth.

“I learn a lot from registrars. It’s a two-way process: having a registrar keeps me grounded and up-to-date.”

So how does he go about teaching them to be “good” but strive for “great”?

“At the centre of that triangle is the golden gift of general practice, which is our continuity of care.

“I try and get registrars to understand the critical role GPs have in our health-care system.”

Frank advised supervisors to get to know their registrar early.

“It’s just like getting to know your patient. You need to get a picture in your mind who the person is because that gives you an idea of the educational relationship you will have.”

“This will help you establish a baseline,” Frank said.

“I say to the registrar ‘If you are not knocking on my door in the first few weeks or months, then I am concerned, because in the early stages of your GP training you don’t know what you don’t know.’

Frank concedes supervision does bring its challenges, which can be managed.

“You need to have dedicated time put aside for the formal teaching because if you don’t do that, time management becomes an issue.

“You also need to have patience because each young doctor develops at their own pace and has their own individual learning needs.

“You have to be prepared to be interrupted in your clinical work, especially in the first few weeks or months.”

Frank, who in his spare time “still pulls on the shorts for golden oldies rugby”, encouraged any GP considering supervision to “just do it”, even early in their career.

“Within two to three years of fellowship you should consider if you are interested in becoming a GP supervisor, because it is a fantastic journey,” he said.

For Frank, the journey continues to reap rewards for the profession, community, and personally. His pride in their development indicates Frank’s enthusiasm for mentoring registrars is not likely to wane any time soon.

“My most recent registrar became not just a good GP, but a great GP, and it was wonderful to be a part of her journey and mentoring her.”

Frank has recently been recognised by GPSA, WAGPET and RACGP for in excess of 15 years service as a GP Supervisor, nurturing the next generation(s) of family practitioners.