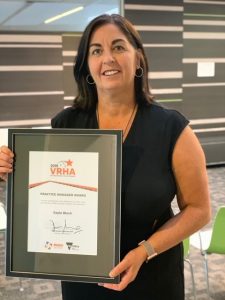 Going the extra mile to support GP supervisors and registrars is all in a day’s work for rural Victorian practice manager Gayle Bloch. While passionate about helping registrars enjoy their experience in general practice, she is equally committed to nurturing their sense of community belonging.

The theory, of course, being a registrar who immerses themselves in the community is more likely to stay beyond fellowship.

“We try to encourage registrars to live here rather than commute. You see the difference; the ones that live here, are more likely to stay,” Gayle said.

“We want them to feel welcome and encourage them to get along to things and be a part of the community.”

For Gayle, this commitment has even resulted in coming out of netball retirement to join a social team with a couple of new registrars.

“I just thought it would be easier for them to play with someone they knew, rather than all strangers,” the Wonthaggi Medical Group (WMG) practice manager said.

In April Gayle was presented a Practice Manager Award at the 2019 Victorian Rural Health Awards, recognising her work in managing 33 staff members, 15 nurses and 25 doctors across three clinics; servicing Bass Coast Health as the exclusive provider of visiting general medical officers, obstetricians and anaesthetists to the hospital; servicing four aged care facilities; and as a qualified accreditor with Quality Practice Accreditation which requires her to do assessments of other clinics.

During her past 10-years in management at WMG, Gayle estimates she has worked with 40 to 50 registrars. She is proud nine former registrars are now permanent doctors at the clinic, including four recruitments from last year.

One of last year’s registrars is now preparing to become a registered GP supervisor at the clinic.
“It shows he has seen the value of the program,” Gayle said.

“We are a large practice, but we are like a family, so one of the important things is to make it an enjoyable and a really positive learning experience for the registrars to become a part of the community.”

Even with a wealth of experience in supporting registrars and supervisors, Gayle is always looking at improving the journey for all parties.

For example, recently she has changed the timing of when to explain hospital billing to new registrars, so the lesson is more effective. Now, instead of a full explanation of clinic and hospital billings during the practice induction, the hospital element is taught soon after hospital visits start.

“Before we were just feeding them the information (during induction) and expecting they would retain it. Now we are making an appointment with the accounts manager to teach them the hospital billings a few weeks after they start the hospital work; we have found getting the timing right is really beneficial because they have seen patients and will then have questions.”

“It takes a little bit of time for registrars to get their head around that they have 20 to 30 minutes with a patient, and they are in charge of that patient. They get a lot thrown at them, so we make sure we find them and check in with them a lot.

“We hold spots out in the supervisor’s schedule, so they have time when the registrar knocks on their door with questions.

“You have to be mindful of supervisors and the pressures they face when a registrar starts.”

Practice managers also need to remember each registrar comes with varying levels of confidence and competence, which in turn impacted the amount of support needed from, and for, the supervisor, Gayle said.

‘“Some will come already quite independent and don’t need much support, whereas others will be in your office for all sorts of things.

“Some won’t have families here and they need that sort of support too.”

And that’s where going the extra mile is in Gayle’s nature.

“I could tell you a lot of stories!” she said. “I’ve even organised the changing of a flat tyre for one registrar who was booked out with a hospital procedure and clinic appointments and needed to get to Melbourne at the end of the day to see family. I thought, ‘What’s more important? Him seeing patients.’ ”